I know YFULL service since maybe 2015, after I started more research in yDNA direction. At that time, I knew that it’s only yDNA tree representation, but I didn’t pay much attention how they do. Later on, 2015-2017, it becomes more popular, and they gave ability to upload DNA raw files to the system and for the dedicated payment they provide more detailed results. I ordered BigY test from FTDNA Aug-2017, but it was delivered only in Nov-2017. And I didn’t have BAM file from FTDNA, which was needed as input file for YFULL. Fortunately, YFULL implemented VCF file analysis, and I was able to upload it and to receive some preliminary results. Jan-2018 I ordered YFULL account based/using VCF (49$), and I knew, that later on I will be able to upgrade with free upload of BAM file. May-2018, FTDNA finally renewed BAM file generation. I requested, and after some time I receive BAM file. Then I uploaded to yfull, so my account upgraded. Jun-2018 got some results from YFULL in Upgrade section. But in fact not so much new info. Anyway, YFULL looks very active service, then have recently published v6.03.41 (Jul-2018), which looks to be following SemVer, and I expect their updates more frequent now. Aug-2019 I received new Big Y-700 results, new BAM file, and I re-uploaded to YFULL, which gave me new ID – YF64515.

Ok, no let’s get more detailed.

Disclaimer: I’m not educated well for the topic, so please take this into consideration, when judging 🙂 Here is short guide tour about YFULL service made by YFULL team. And for more details, u can read their FAQ.

Back to Oct-12-2017 there was message/post from Ted Kandell on Yfull.COM facebook group: 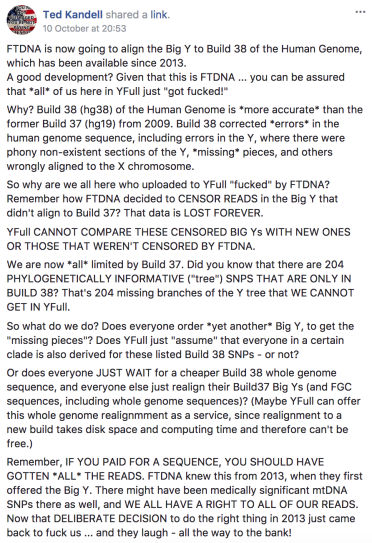 And attached URL. So I started worrying, maybe that is why delay?

On Facebook group there was also another related question (deleted later by admins). Important here is that it’s bright example, how FTDNA is slow comparing to 23andme, who already using Chr 38 standard for ages:

Also, one more important note, for those, who received Build 37 BAM file, and already has uploaded to Yfull:

Then I saw message on FTDNA by Zdenko Marković from I2a FTDNA group:

An important notice for those who have Big Y test results or ordered this test. FTDNA is updating its representation of Big Y result. The most important change is in human genome build. Until now, all your results as well as data in your VCF and BAM files were based on the hg19 human genome representation. As of today they will be displayed in a new hg38 human genome representation. Maybe you noticed that you have „Results Pending“ page when you click on your Big Y section. You will be notified by email once your results are processed and ready. More about hg38 can be found here: https://www.ncbi.nlm.nih.gov/grc/human What does this mean regarding your results? It will not change your haplogroup. It will not affect your place in the haplotree. But it will change the position of your SNPs and your private novel variants. Some new features in your Big Y results representing are also expected. Ray Banks from ISOGG put the comparison table for the known SNPs here: Google Doc YBrowse.org is also updating to hg38.

Family Tree DNA have written to Group Administrators about a great changes in classification: ” We’re releasing a big update to Big Y on October 10th …. Once the release is live, we will be recalculating Big Y matches. We anticipate this to take approximately 5-7 days. During this time, you will see a “Results Pending” page when you click on the Big Y section. You will be notified by email once your results are processed and ready. We’ve updated from hg19 to hg38. This is a more accurate representation of the human genome and is the most recent version referenced by the human genome community. Some of the advantages of hg38 are: Better mapping of NGS data to the proper location Consideration of alternative haplotypes across the genome”

Btw, on YFULL, there is such page – HG38 Announcement, where we can read main info. 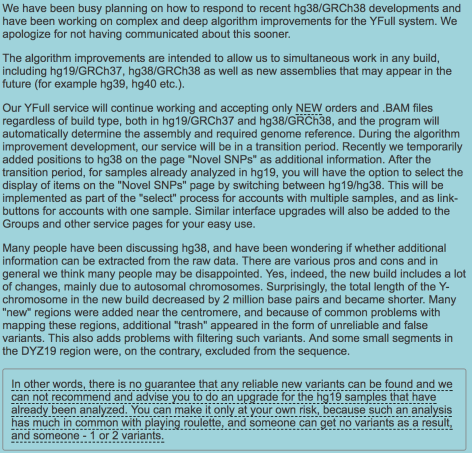 Build 38 however gives some important advantages. (Build 38 was used by FGC for quite a while now, BTW.) It’s a much more accurate Y Reference Sequence, and therefore some regions of false Y sequence are eliminated, and some newly identified regions have been added. There are also some rearrangements of the existing Build 37 sequences. Therefore, when these “reads” (short fragments) are aligned – matched up to the Reference Sequence – they are more likely to “fit’ properly because the Reference Sequence more closely reflects an actual Y chromosome sequence. (A sequence however coming from at least *two* people in very different haplogroups.) Also, some reads may “fit” (be aligned to) some newly added Y sequences, so these reads that were formerly tossed out can now be used. The “false” Y regions also go away too, so there *should* be fewer “junk” SNPs, particularly in the Big Y. However, this doesn’t seem to be the case with the Build 38 Big Y itself. Since Build 38 was available in 2013, FTDNA should have been using Build 38 all along, and not doing so was just carelessness!

So due to delay on FTDNA with BAM file generation, it’s kinda delay with proceed to YFULL upload. But, Jan-13-2017 there was nice update on Facebook yfull.com group page: 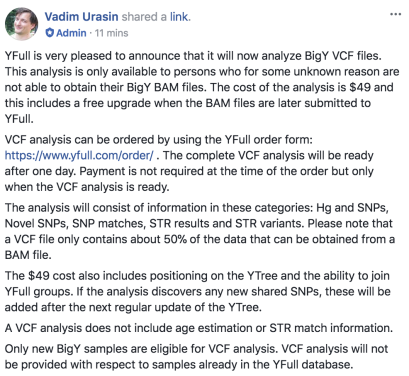 I uploaded/requested/ordered YFULL VCF analysis Jan-13-2018, and I hoped that at least those 50% of data can be analyzed first, before FTDNA continue BAM file generation, which happened in May-2018, and I had BAM file, so my final upgrade to BAM was for free on YFULL.

YFULL system assigns ID for every profile after upload. I have YF11414, and now, Y4460 tree updated, with information about me: 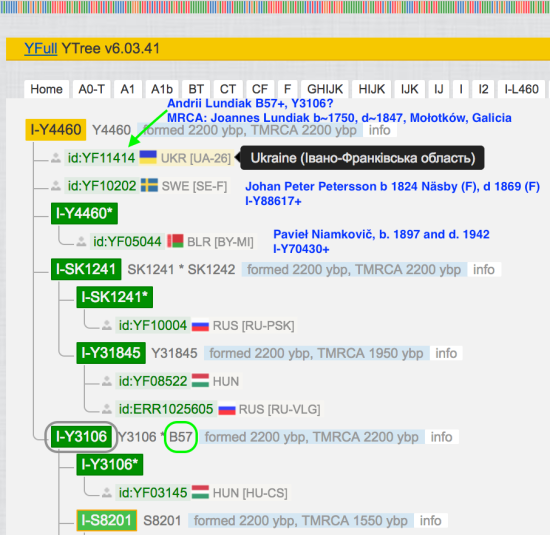 Note: in blue color, I added information about closest IDs/profiles/neighbors, and I contacted them already. 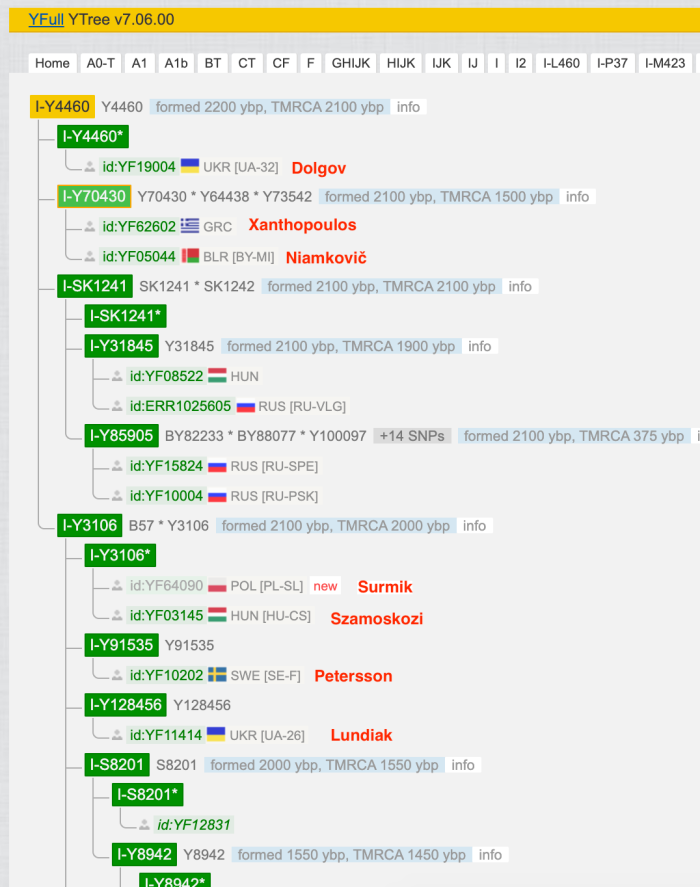 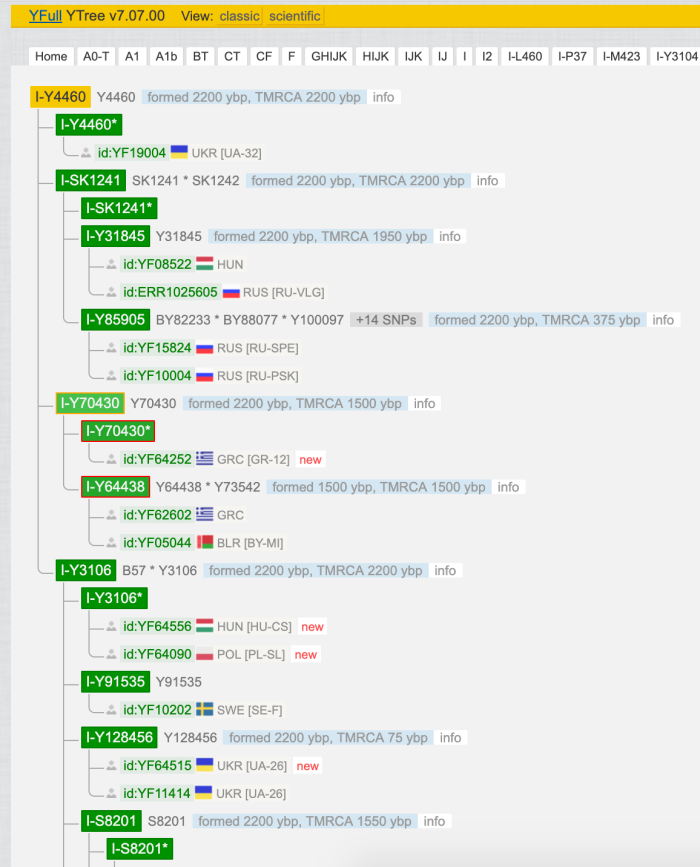 YFULL grouped information about SNPs under one section/menu with different sub menus.

Known SNP – a SNP that has been discovered and named by YFull or by another organization or person. There is a list of organizations and persons at the end of the Positive, Ambiguous and No call tab. Positive SNP – a SNP with a mutation. Also called a derived SNP and a SNP variant. The mutations in a customer’s raw data sample (BAM file) establish the customer’s genetic path from the deep past towards the present. Negative SNP – a SNP without a mutation. Also called an ancestral SNP. About 95% of a customer’s SNPs are negative. 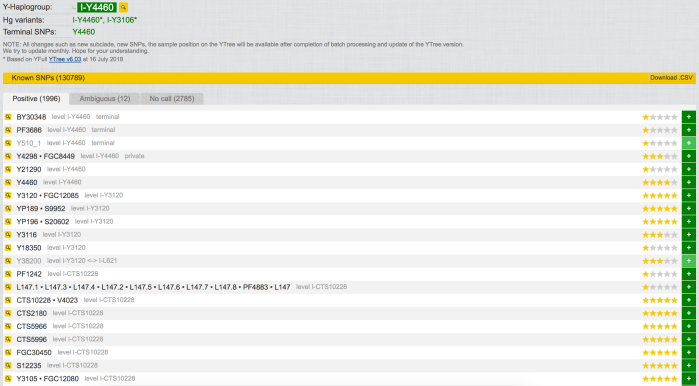 Positive SNP is interesting list, because it shows me, on which level, on which branches, I’m positive and in which position (which SNP). For example BY30348 shows “on level I-Y4460”, but when I search BY30348 from main page, it gives me multiple results of “positiveness” for other I-Y**** SNPs: 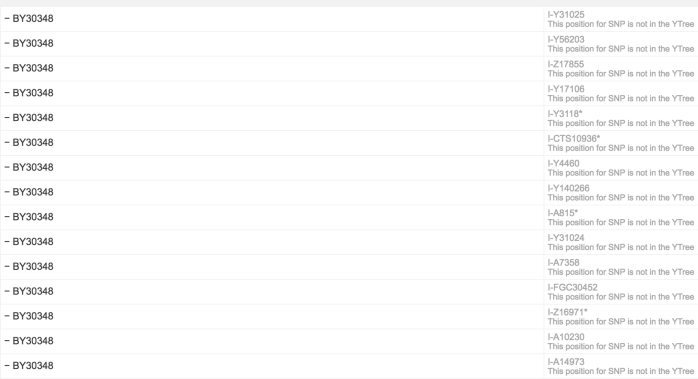 Another example with PF3686: 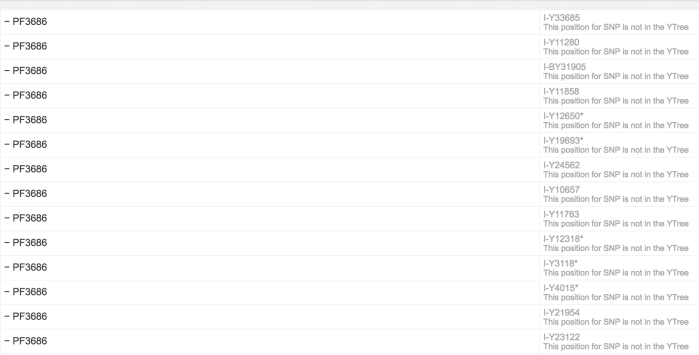 Those Ambiguous SNPs are very interesting, because in fact it shows, that despite the fact we have different haplogroups like R1a, I2a, G, N, E, etc, there might be mutation, in the same place of chromosome Y for all people, and it then kinda shared/common SNP. Not sure how it works on biological level, but this we definitely discovery for me.

For example, SNP Z1950, which is ambiguous for me, in fact belongs to N hg.

Or Y113, which “kinda” belongs to many haplogroups: 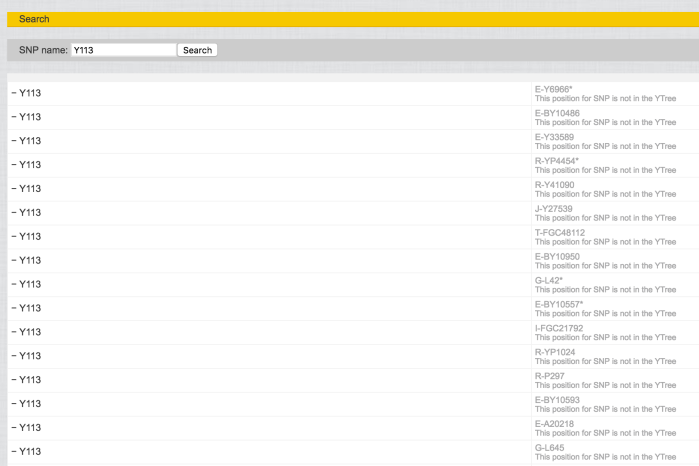 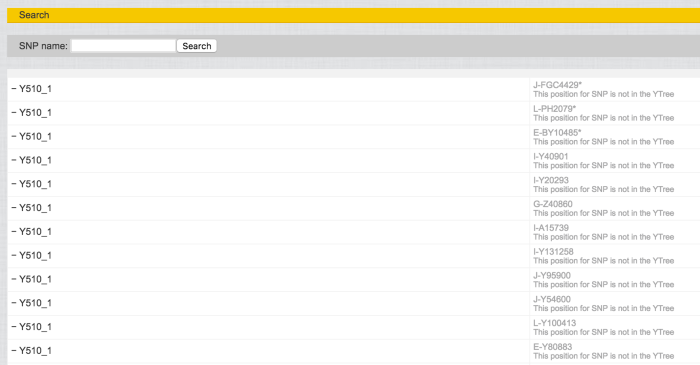 FAQ: No Call – for a specific SNP or ChrY position in a sample, the YFull analysis did not detect any reads or other information.

As I guess, “No call” section/tab is based on all known SNPs, which are positive for someone else in database, but not found in my DNA at all. It’s odd, considering YSEQ.net gives me B57+ and neither FTDNA nor YFULL shows it at all.

This is my main question for genetics research in 2018.

FTDNA system shows my 12 Unnamed results/entries, which are about positions in Chromosome Y, without defined name. Zdenko Markowic from FTDNA also mentioned, that my DNA results show 19 private novel variants.

So I have 10 best qual Novel SNPs and 5 Acceptable qual SNPs.

Some of Novel SNPs are marked with char G, which is about gene. For more details SNPedia.com will help. Or Promethease report.

This is new after BAM upload. Age estimation is always important and interesting.

SNPs split in 4 groups, depends on known or novel and if it matters for estimation or not. Snapshot for Jul-2018. And here is the latest (Sep-2018):

So, using my BAM file, YFULL is able to analyze more details, here is snapshot: 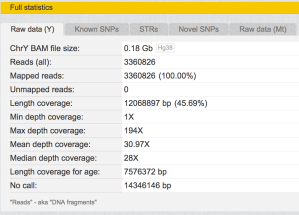 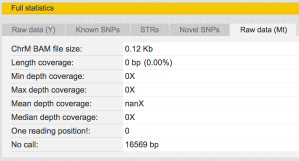 It shows, that YFULL system recognize/remembers hg19 position with number “9028830” but also, new hg38 position “9191221” is already in use. Known SNP in this position is Y4460, and it’s mutation from G to A, which I have also, and this is exactly how it process I’m positive. There is also information from YBROWSE service, which shows more details about SNP.

From FTDNA, even after BigY test, even after I have BAM file, it’s still not clear about B57 and Y3106 for me. YFULL says “no call”.

YFULL shows, that there is known SNP B57 C => T, and I am of such. But, when I “Check SNPs” directly, it shows me, that BAM file doesn’t have information about B57:

And BAM viewer is also empty:

UPD Sep-22-2018. According FTDNA, based on recent Big Y results of new account from Lithuania, FTDNA now can distinguish our shared SNPs in dedicated group/branch.  So far on i2aproject blog, it’s named as Y128456, and might be different name in FTDNA and YFULL system soon. But so far, here is info about Y128456 in YFULL:

First time, I uploaded VCF file, so after results arrived, I could have used the viewer dedicated to show details about SNP. Here is snapshot with information:

Yes, it showed, that B57- and Y3106-, and as far as I knew, it’s because of less information from VCF file.
For sure, this viewer might be not relevant anymore, because most of people upload BAM files.

So now, in YFULL system, when I upload BAM file, I can see more details about SNP. For example Y4460 in BAM viewer looks like this:

But B57 looks less information now:

I would expect, at least hint/title. Because I may suspect, that there is no known results for B57 to be positive. But I’m not sure. Same view for Y3106.

So, initially I had VCF file upload, so YFULL did initial analysis, but later on BAM files gave more dat and as result I have more details. And “Upgrades” section shows exact changes. Snapshot for Jul-2018 showed PF6442 the first in list, and now it’s Y510_1 is the first:

Results almost the same. There are slight differences, but it doesn’t change my terminal SNP. 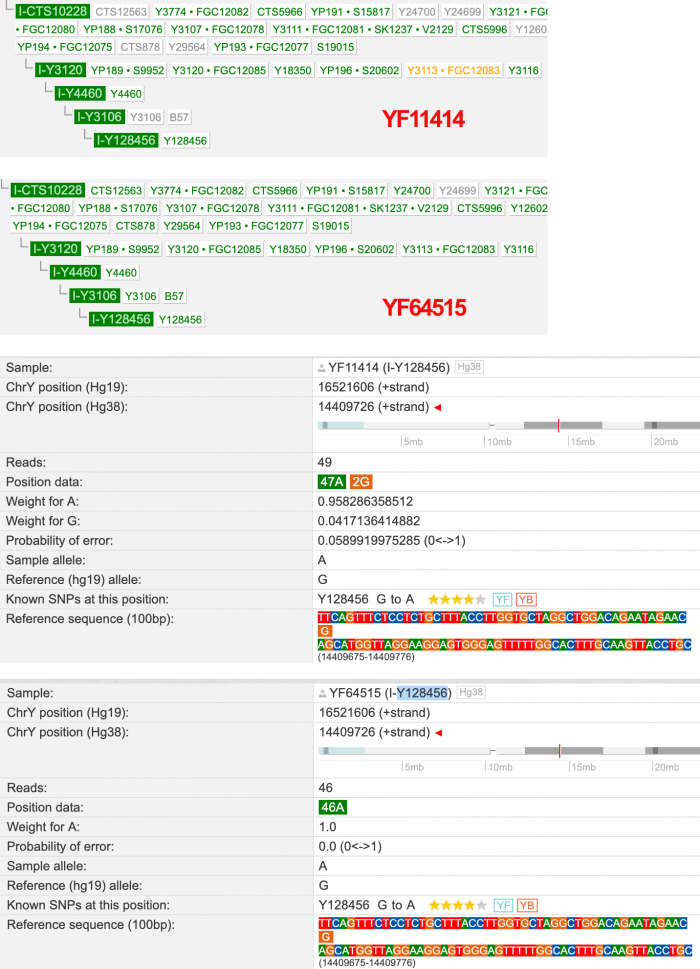 Results are almost the same. There are slight differences, but it doesn’t change my terminal SNP.

Interesting about comparison between YF11414 and YF64515 data in regards to Known SNPs: 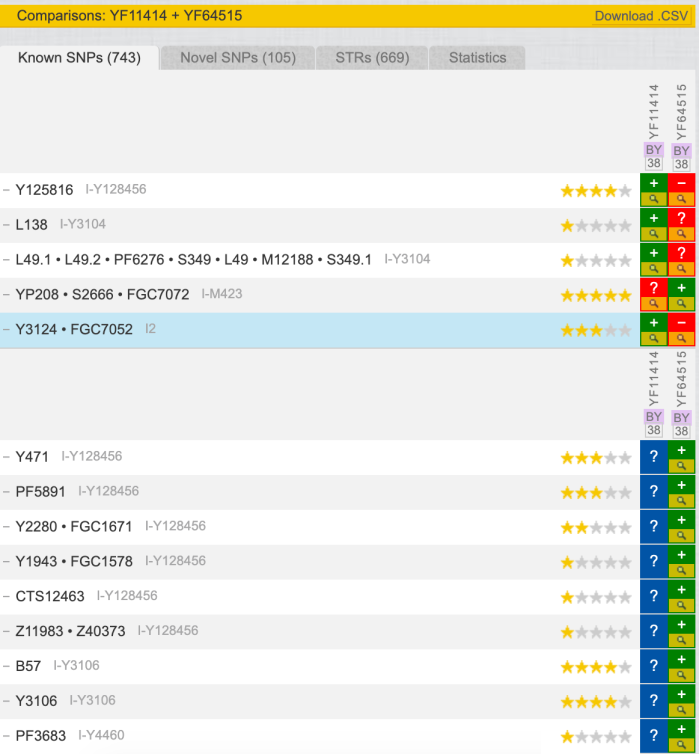 How Statistics looks after Big Y-700: 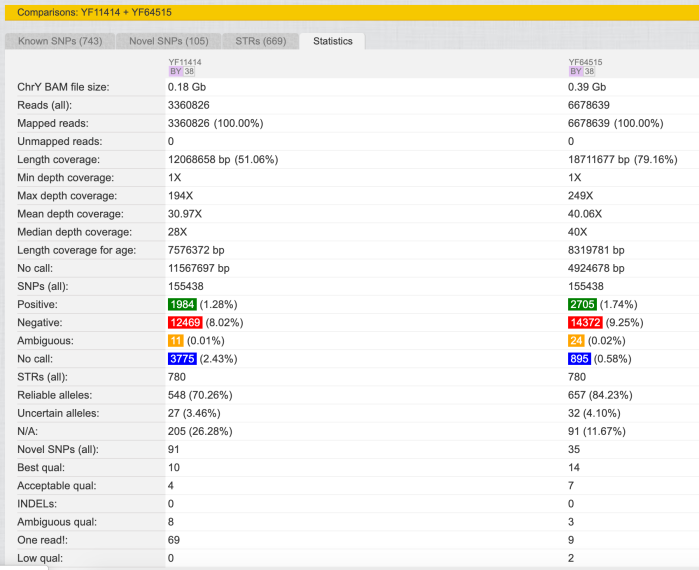 Just a short snapshot – list of SNP matches – people, who does have the same terminal SNP, or at least close with haplogroup. 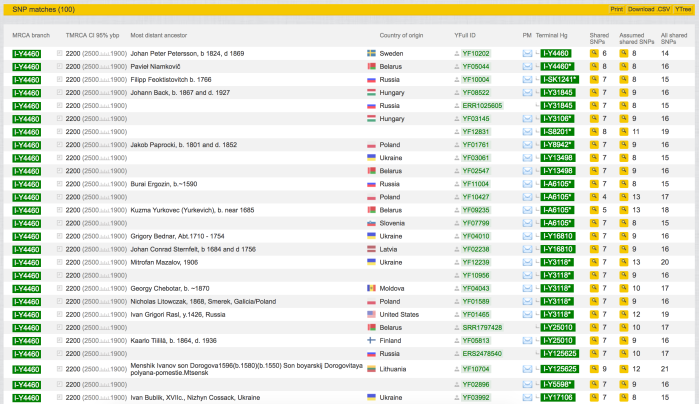 Interesting columns are “Shared SNPs” and “Assumed shared SNPs”. Example of my and YF10202 SNPs:

So when VCF analysis done first, there was no STR info. But after BAM file uploaded, I have STR results and even STR matches.

Similar data as in FTDNA system, slightly changed in view.

But also some chart representation: 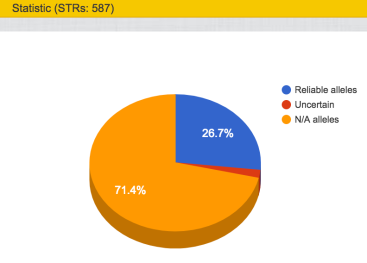 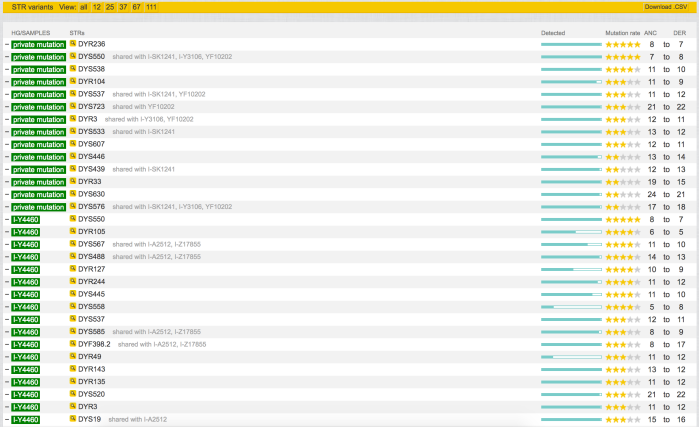 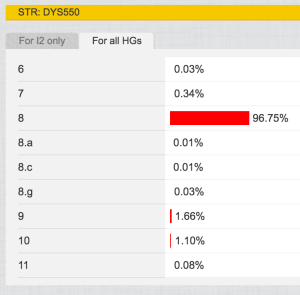 So far, matches are far from me (from Y4460). Even close matches are mostly from neighbor SNP S17250. But it’s STR level of matches. 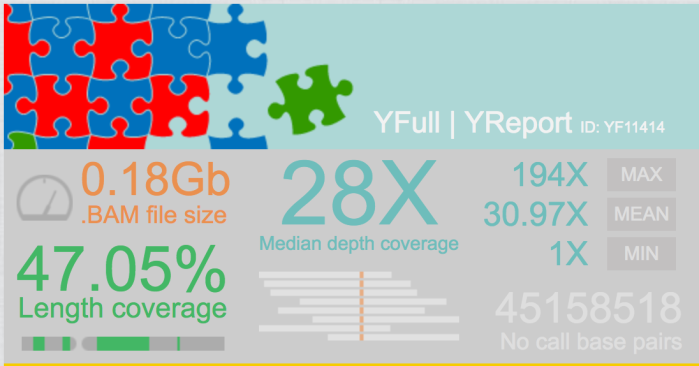 This is dedicated YFULL page, where ALL SNPs shown since Adam till now. It’ huge but shared URL with public. Have a look.

SNPs section also shows some News – updates on YFULL system. Not really useull for me so far, but still nice. 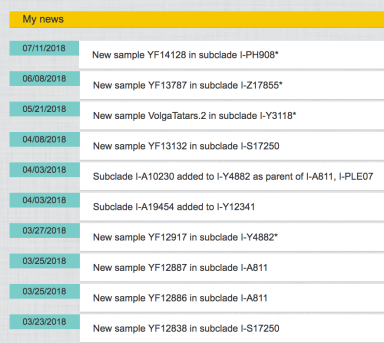 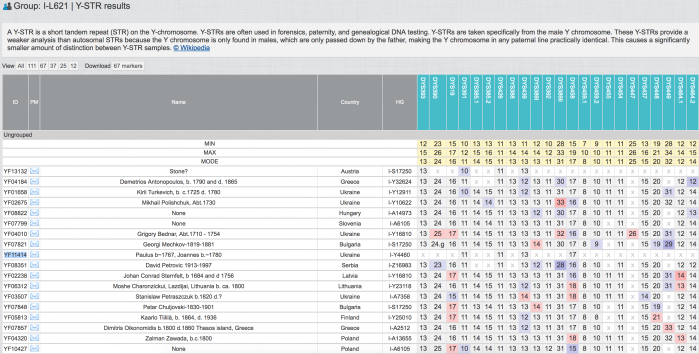 So essentially it’s the same data as in FTDNA system mixed with YFULL system.So far not much new stuff.